Who is behind the Auberge & Restaurant Les Clarines located in the Bauges? 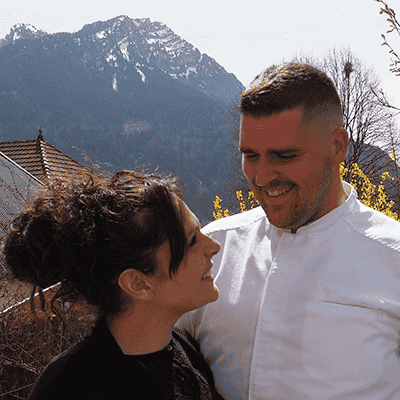 About the 3 stars Hotel Les Clarines

Meryl Le Monnier, a passionate nurse who fell in love with the Bauges region several years ago, dreamed of opening a restaurant, and was waiting to set up this project together.
Always attracted by the work in the field, from her activity as a private nurse and then as a collaborator in Lescheraines, the opportunity to take over the Auberge was an obvious choice.

Meryl grew up in a family in which cooking was a religion. She has always known the great family tables, the French culinary culture is a family history at Le Monnier. His grandfather was a cook, so the art of the table is not so foreign to him. The listening and contact skills she has developed during her career as a nurse will be a major asset in welcoming the clientele of this family inn. Meryl decided to retrain in the restaurant and hotel business to better understand the takeover of the Auberge.

Benjamin Schiff, who graduated from the hotel school of Illkirch-Graffenstaden with a BTS in hotel management with honors in 2015. He has always dreamed of being the Chef of his own establishment. After many exciting experiences, including :
– Pré Catelan in Paris, a 3-star Michelin restaurant in the kitchen of Chef Frédéric Anton,
– Mare aux oiseaux in Saint-Joachim, 1 star establishment in the Michelin Guide, under the orders of Chef Guérin,
– Restaurant Histoires in Paris, 2 stars in the Michelin Guide with Chef Mathieu then he joined the Hexagone in the post of demi-chef de partie,
– Tour d’Argent in Paris, held by Chef Philippe Labbé during his experience. Starting at the position of demi-chef de partie with the garnishes, he then moved on to the meat cooking and meat sausage making. This house will mark him for life!
– Several extras in the banquet service, room service of the Parisian Palace Le Peninsula, whose Executive Chef is Christophe Raoux, Meilleur Ouvriers de France.
Benjamin will also be Chef de Partie at L’Oiseau Blanc, the gourmet restaurant of Le Peninsula. This restaurant will obtain its first star in the Michelin guide in 2019, Benjamin was part of the team that got this honor. Chief Raoux then left for Switzerland with the M3 group. He offers Benjamin to follow him and offers him the position of Sous-chef at Le Vallon, a gastronomic bistro located in Conches. Benjamin decides to try the experiment. He held the position of Sous-chef of this restaurant before taking over the Auberge Les Clarines with Meryl.

You will have understood that the Auberge Les Clarines is more than a professional project, it is a life project for two people who are passionate about gastronomy, service and the Bauges.

For 15 years, Catherine and Matthieu have been running the Auberge Les Clarines, which they completely redesigned until their retirement. Today, Meryl and Benjamin are pleased to welcome you for a new adventure. A quality cuisine and a history that they wanted to preserve while adding their own touch.

For Meryl and Benjamin, the Auberge Les Clarines is oriented on quality cuisine, elaborated with local products.

The Auberge Les Clarines supports the local economy by favoring suppliers from the Bauges area. You will be able to taste signature dishes such as contised chicken, the famous Matouille with Tome des Bauges cheese, or the Savoy cake. The menu proposed by Benjamin and his team follows this same requirement. An elaborate, deliberately succinct menu that changes regularly according to the seasons, the availability of products and the Chef’s desires.

“A great discovery!
An excellent meal, a staff that listens and takes care of you, and the new owners are warm and welcoming. If you want quality and customization, you’ve come to the right place! We recommend this address for dining or sleeping.”

Lovers of the Bauges

You can find out more about which cookies we are using or switch them off in settings.

This website uses cookies so that we can provide you with the best user experience possible. Cookie information is stored in your browser and performs functions such as recognising you when you return to our website and helping our team to understand which sections of the website you find most interesting and useful.

Strictly Necessary Cookie should be enabled at all times so that we can save your preferences for cookie settings.

If you disable this cookie, we will not be able to save your preferences. This means that every time you visit this website you will need to enable or disable cookies again.

This website uses Google Analytics to collect anonymous information such as the number of visitors to the site, and the most popular pages.

Please enable Strictly Necessary Cookies first so that we can save your preferences!

Please enable Strictly Necessary Cookies first so that we can save your preferences!